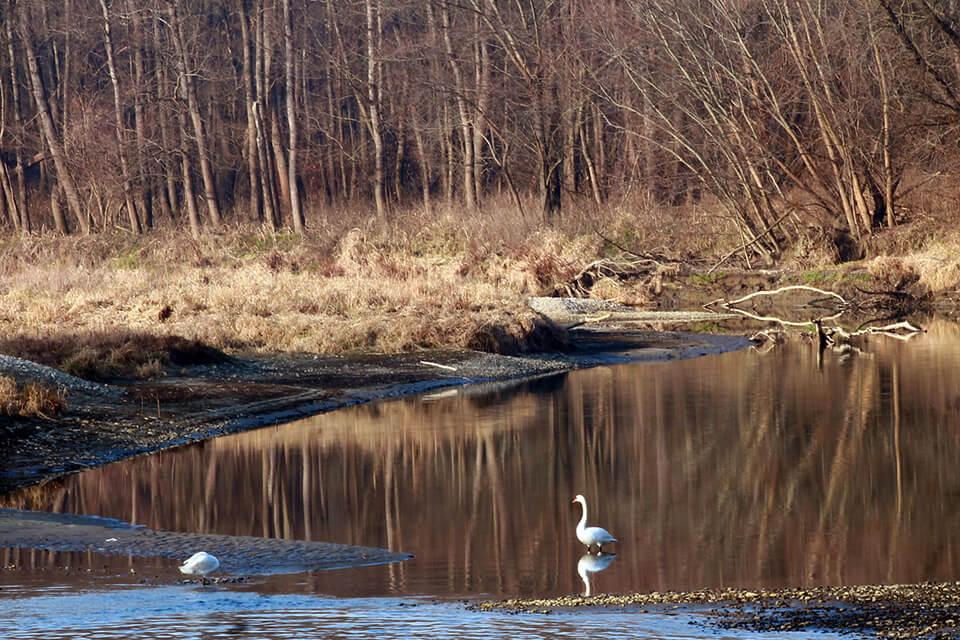 Múra (German Mur, Croatian and Hungarian The Mura, in Prekmurje dialect Müra, Möra) is a river in Central Europe, a left tributary of the Drava River. It rises in the Radstadt Tauern, the most western part of the Low Tauern, in the Murwinkel high mountain valley in the Austrian federal state of Salzburg. First, it flows through the glacier-transformed valley of Lungau, mostly towards the east, past the town of Tamsweg. Somewhat lower, it enters the federal state of Styria and continues eastward through Murau, Judenburg, Knittelfeld and Leoben to Bruck an der Mur, where it acquires the left tributary Murica. Here it turns sharply to the south; in a narrow gorge it passes through the belt of the southern limestone Alps, and near Gradec (Ger. Graz) enters into the wide Graz Basin. Through this, the Mura runs south through Lipnica (Ger. Leibnitz) to the Austrian-Slovenian border and then along the border to Gornja Radgona. It crosses Slovenia in the south-easterly direction, reaching the Slovenian-Croatian border below Razkrižje; then, it flows along the Croatian-Hungarian border. From the left, just before the outflow, it is joined by the Principális canal and flows into the Drava at Legrad. The larger left tributaries are the Taurach, Liesing and Murica (Ger. Mürz) in Austria and Krka, into which the Ledava river flows; the right tributaries are the Kainach and Solba (Ger. Sulm) in Austria and Ščavnica in Slovenia and Trnava in Croatia.

In the uppermost stretches, the Mura is a typical high-mountain river, but it soon descends to the wider Lungau Valley at an elevation of approximately 1000m. Through the valley, it flows past many villages, between meadows and fields; it is regulated and surrounded only by a narrow belt of riparian vegetation along the entire stream. At first, the river remains like this in Styria, but already above the city of Murau, there are the first two of 21 run-of-river type hydropower plants. The river flows further eastward, making turns across the wide valley all the way to the town of Judenburg, where it enters the 20 km long and 8 km wide Judenburg Basin. Brown coal was once produced here, and the local industry (paper, metal) used to heavily pollute the river. Downstream from the Knittelfeld, the river re-enters a narrow valley between wooded hills, flows through Leoben with large ironworks in nearby Donawitz and reaches Bruck an der Mur. Here, the valley along its left tributary Murica (Ger. Mürz) joins the valley of the Mura from the north-east, from where the southern railway leads from the Semmering Pass and continues along the narrow Mura gorge towards the Styrian capital. Already from Leoben, there are many power plants on the river, all the way to the last one on the Austrian stretch of the river at Špilje (Ger. Spielfeld). The Mura flows through the old part of Gradec (Ger. Graz) and then across the wide plain of the Graz Basin to the south. Here, too, the river is completely regulated with a series of hydropower plants; on the banks, it is accompanied by millstreams which were once built to power flourmills and sawmills. In the past, the Mura was a typical lowland river at this point, and was shifting its course through the plain, but it was already fully regulated already in the second half of the 19th century. From Špilje (Ger. Spielfeld) to Gornja Radgona, the Mura forms the border between Slovenia and Austria. In this part, it flows along the northern edge of Slovenske gorice and then passes Apaško polje in a wide arc. Already here, a wider belt of groves begins on both sides of the river, which become even wider downstream from Radenci. At Gornja Radgona, the river again touches the hilly Slovenske gorice, and there has always been an important crossing of the river to Radgona (Ger. Bad Radkersburg) on the left bank. The 28 km section of the Mura from Gornja Radgona to Gibina has also changed considerably. In the past, the Mura often spilled over the wide plain, especially on the left bank, but, due to flood protection embankments, the floods are now more or less confined to the belt of groves directly along the river. Due to past regulation and hydropower plants in the upper stretches, the river transports much less gravel and other debris than it used to, which has made the riverbed considerably deeper in recent decades. This has resulted in a drop in the groundwater level, which also results in a decline of ecologically important flood forests along the river. From the outflow of the Krka River into the Mura, the Mura makes turns towards the south-east and forms large turns or meanders until it flows into the Drava at Legrad. 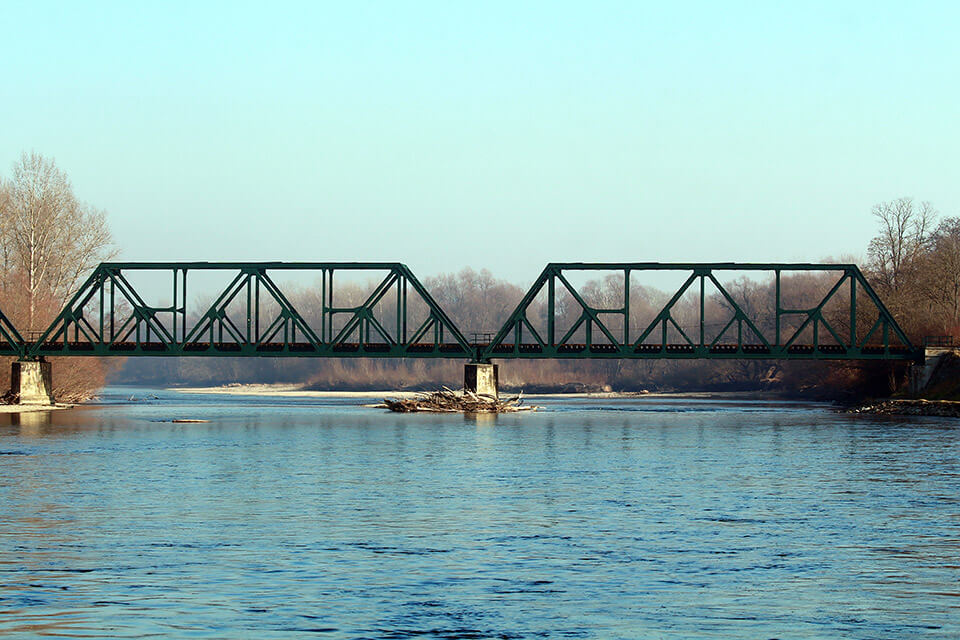 In the upper stream, the Mura is a typical torrential mountain river, mostly regulated, and does not cause any special problems. Below Gradec, where it once shifted the riverbed across the plain, the river was regulated already in the second half of the 19th century, and today it flows through a series of run-of-river hydropower plants. In the Graz Basin and also farther downstream, in the last Ice Age, the river widely surfaced today’s gravel plain and, then, after the end of the Ice Age, it again cut its riverbed through its own deposits and produced a large alluvial plain which becomes wider and wider downstream. A large part of this plain is still in the range of large floods, and from here originates the big difference between slightly higher, cultivated and densely populated parts and the lowest parts of the plain along the river, which are mostly left to be covered by groves and marshy meadows. This wide plain has been exposed to extensive floods in the past, which spilled over several kilometres and posed a risk to villages lying away from the river, mainly on the left bank downstream of Petanjci.

The series of hydropower plants in Austria cannot contain flood water, since the plants are of the run-of-river type and have small retention basins; therefore, along the Slovenian part of the Mura, there are almost touching flood protection embankments on both sides, which can currently hold floods in the area of groves and nearby water meadows. On the right bank, there is a flood protection embankment from Vučja vas to Gibina, and on the left bank, from Petanjci to Pince, but they will never be able to provide complete safety against floods. 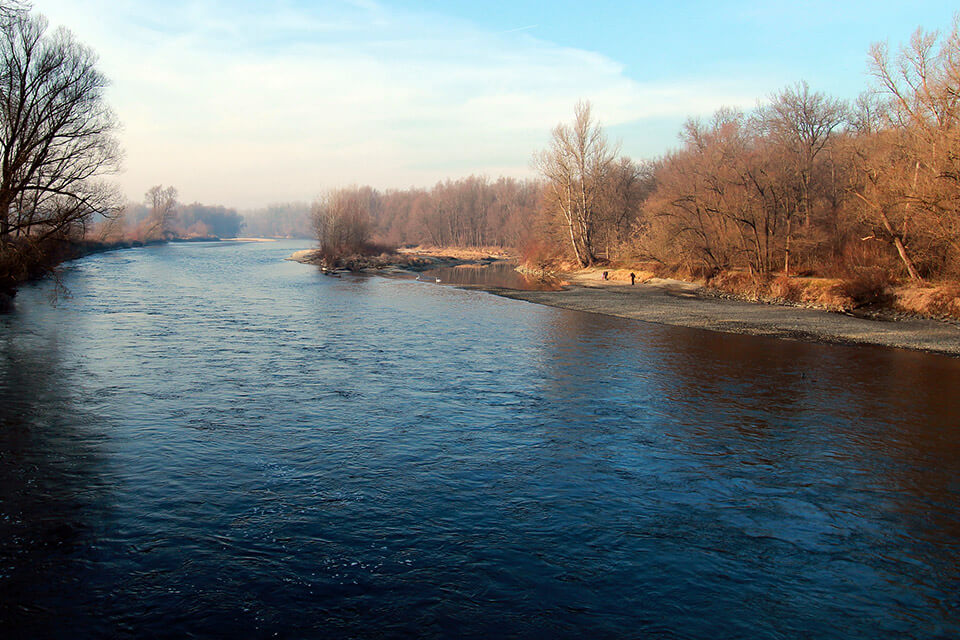 One of the most severe floods of the Slovenian Mura occurred on 11th and 12th November 1925. After a heavy, long-lasting rain, the river spilled over a wide area and flooded many villages on both banks. The worst affected settlements were Veržej, Dokležovje and Petišovci; even in Murska Sobota, the water was over two metres high. Slovenski gospodar describes the tragedy: “It can be said that Prekmurje has never been hit by such an accident. Due to terrible rain, all streams spilled over and the Mura flooded the entire landscape to a height of several metres. It was a terrible view of the huge muddy lake from which only trees and the roofs of houses were seen, where frightened families gathered, cold in the worst rain, and waited for help without food, at constant risk that the water would take away their only support and swallow them. Their property was floating around in the muddy water; in stables, the animals were howling and lowing in the rising water until they drowned; where they managed to get the animals out of the barns in time, they nevertheless died, because the water rose over 2 metres high and killed everything that had not saved itself on the trees or roofs.”

Severe flooding of the Mura also occurred in August 1926, August 1938, from 13th to 17th July 1972 and, finally, in August 2005. During this last flood, the embankments built in recent decades fully fulfilled their task, since no catastrophic floods occurred, despite the highest recorded flow (in Gornja Radgona on 22nd August 2005: 1350 m3). With utmost effort, firefighters and local residents managed to reinforce the embankments in time, so the water did not spill onto the plain, and instead the water mostly remained within the flood protection embankments. Nevertheless, the consequences of the flood were severe, since groundwater and smaller streams also flooded; as a result, 39 bridges were damaged or destroyed and around 300 houses were under water.